Indian Wells is a city in Riverside County, California, in the Coachella Valley. Incorporated in 1967, it lies in between the cities of Palm Desert and La Quinta. As of the 2010 Census, the city population was 4,958.

Where is the Indian Wells, California 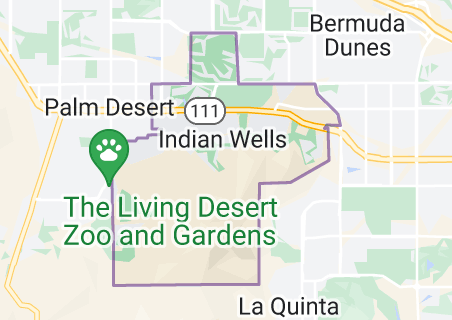 Click image and open Indian Wells, California the on map

Indian Wells is a city in Riverside County, California, in the Coachella Valley. Incorporated in 1967, it lies in between the cities of Palm Desert and La Quinta. As of the 2010 Census, the city population was 4,958.

As early as 1820, the area now known as Indian Wells was the site of a thriving Indian village, as reported by W.P. Blade, a Smithsonian Institution geologist. A decade later, when gold was discovered on the Colorado River, William D. Bradshaw built a trail from Los Angeles through the desert to the gold mines. The Alexander and Company Stage Line used the trail to transport prospectors and Indian Wells became an important stop along the trail. Competition from the Southern Pacific Railroad caused the route to be abandoned briefly in 1875 before being reactivated by the Wells Fargo Company the following year.Over the next decades, settlers gradually arrived in the area and date palm ranches became profitable. The area's first golf courses were opened in the 1950s at the Eldorado Country Club and the Indian Wells Country Club. In 1957, Desi Arnaz opened his Indian Wells Hotel (forerunner to the Indian Wells Resort Hotel). In 1960, Arnold Palmer won the first Bob Hope Desert Classic golf tournament. President Dwight D. Eisenhower was a regular Indian Wells visitor and later an Eldorado homeowner.In an election held June 27, 1967, to avoid being annexed by neighboring cities such as Palm Desert, the inhabitants of Indian Wells voted to incorporate as a city. On July 14, 1967, Indian Wells became California's 400th city and the 16th in Riverside County. Since then, Indian Wells has continued to grow, with the development of resort hotels, golf courses and luxury residential areas.

There were 1,982 households, out of which 8.4% had children under the age of 18 living with them, 63.1% were married couples living together, 3.0% had a female householder with no husband present, and 33.2% were non-families. 28.4% of all households were made up of individuals, and 17.6% had someone living alone who was 65 years of age or older. The average household size was 1.9 and the average family size was 2.3.

This climate is dominated in all months by the subtropical anticyclone, or subtropical high, with its descending air, elevated inversions, and clear skies. Such an atmospheric environment inhibits precipitation.

Even as both the state of California and Riverside County trended more Democratic from the 1990s onward, the GOP presidential and gubernatorial candidates have continued to carry Indian Wells by large, albeit smaller margins; most recently, Donald Trump carried the city by a margin of 20.69% in his 2020 re-election bid.

The GOP also retains a very strong voter registration advantage in the city. As of August 30, 2021, there are 3,343 registered voters in the city of Indian Wells. Of these voters, 1,720 (51.45%) are registered Republicans, 868 (25.96%) are registered Democrats, and 557 (16.66%) are not registered with a political party. Indian Wells is one of three incorporated cities in Riverside County where the GOP retains an outright majority of registered voters as of August 30, 2021, the other two being Canyon Lake and Norco.

Sam B. Williams† – inventor and businessman